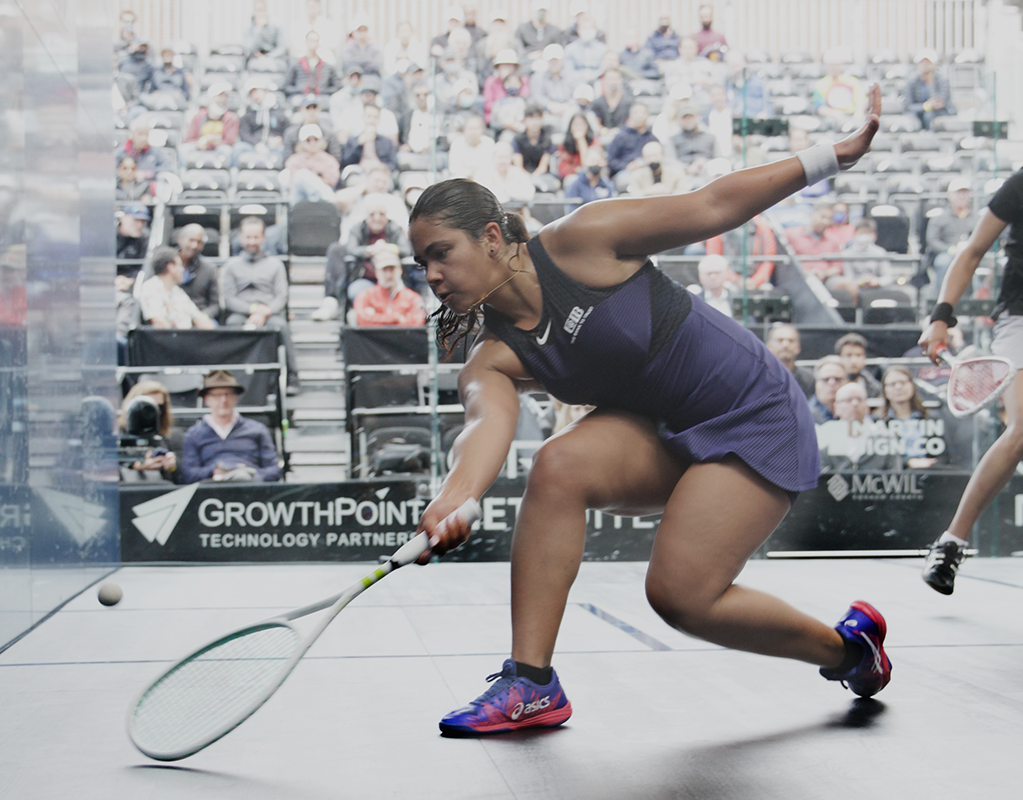 On Dunlop Kids and Family Day presented by Alkira, the 2021 Oracle NetSuite Open semifinals kicked off with the 16thcareer battle on the PSA tour between Egyptians Mohamed Elshorbagy and Karim Abdel Gawad. The match turned out to be appropriate as aspiring junior squash players in attendance saw a clinic in how to play the backhand. While both players are magicians in all areas of the court, both seemed content to hammer away at their length on the left wall—while occasionally moving proceedings to the other side to keep each other honest.

The first and second games played out the same, but with different outcomes. In each, top-seeded Elshorbagy jumped to an early lead by establishing control of the court, relentlessly wearing out the back left corner with length, and ultimately forcing an error out of Gawad. Rather than fold under Elshorbagy’s pressure, Gawad slowly crept back into the game by eliminating errors and answering with his own depth, with the added dimension of well-placed and timely drop shots. Elshorbagy finally won the game, 16-14.

In the second, Elshorbagy squandered two game balls when Gawad capitalized on timely changes of direction, leaving Elshorbagy scrambling to keep his feet. A no-let decision at 11-10 gave the game to Gawad.

After all of the effort put in to level the match, however, Gawad ran out of steam in the third. Midway through the game, Elshorbagy ran away with last seven points to advance to the semis tomorrow evening.

Trailing 7-8 in the third, sixth seeded Egyptian Salma Hany held her backhand volley at midcourt just long enough to send her compatriot, top-seeded World No. 2 Nouran Gohar, the wrong way to even things up. Hany followed that up by catching Gohar in a stroke situation, gave one point back to 9-9, and then finished off the upset with a stroke and another drop shot to the front left.

The win is Hany’s first over Gohar after losing their first seven matches. “Nouran is like a lion looking at a piece of meat on the court,” Hany said laughing afterwards. “You just don’t want to look at her.”

By advancing to the semifinals, Hany has taken her success in this event one round further than she did in 2017. This year is Hany’s fourth visit to San Francisco.

New Zealand’s Paul Coll has been known throughout his career as being the fastest player on tour, able to cover virtually every shot. In his earlier years, he was missing the weapons to finish off points, but that has all changed now. Coll is still relentless with his court coverage, but his short game has become severe, and he wrong-foots his opponents with regularity.

Today, playing Egyptian Marwan Elshorbagy, Coll put his fitness and persistence to excellent use. The match went the distance, but the later stages of both the second and third games showed the impact of the punishment Coll had inflicted on Elshorbagy. The Egyptian took an early lead in the match by winning the opener but, by the middle of the next two games, he began to slow down slightly which allowed Coll to string points together and take both games.

When asked afterwards if he knew who he plays next, his response was short: “Yah, the older one.” Coll and Mohamed Elshorbagy will meet in the semifinals on Sunday at 6:45pm.

In a game of cat and mouse, New Zealand’s Joelle King dictated play from the start, placing balls in all four corners and daring Egypt’s Hania El Hammamy to go get them. While El Hammamy was happy to chase the ball down, the end result mostly found King winning the points.

It was a methodical performance by King, who was looking to reverse the previous two results she’d had against El Hammamy.

“It was kind of one of those matches where I wasn’t really listening to what the score was,” said King in post-match comments. “There’s 12 years between us, and I think today having that experience served me well. I think I played the court a bit better.”

In the semifinals, King will face Salma Hany after she upset Gohar earlier today.