October 01, 2017 By Chris McClintick no Comments 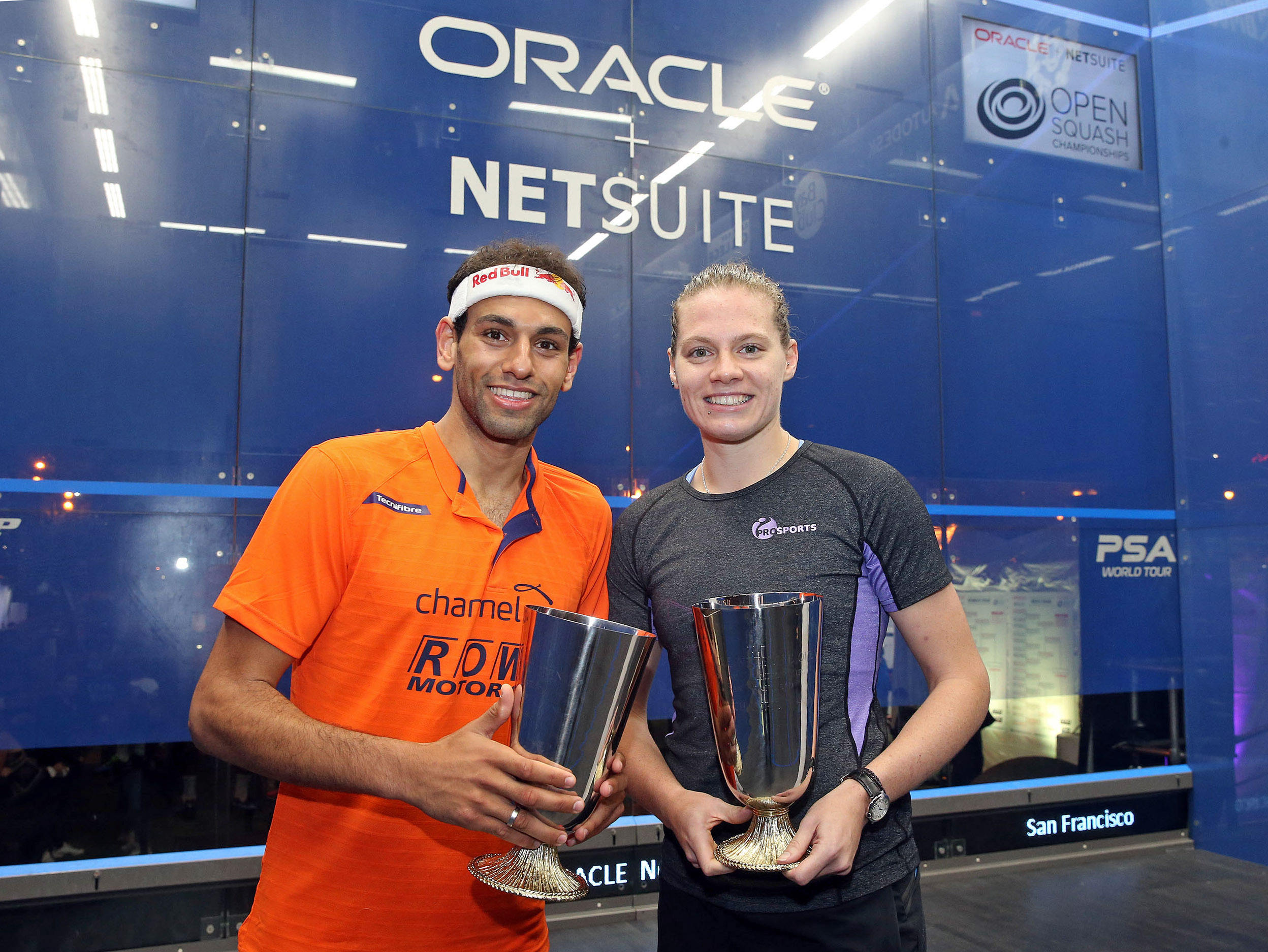 The Oracle NetSuite Open trophies will have two new names engraved on them after Egypt’s Mohamed ElShorbagy and England’s Sarah-Jane Perry both claimed their first titles Saturday night in front of a capacity crowd at Justin Herman Plaza, San Francisco.

The women’s final opened proceedings on the Oracle NetSuite Challenge Court between Perry, the 2015 finalist three seed, and two seed Nicol David, who was making her final debut in San Francisco.

It was David, the eight-time world champion, who started on the front foot in the first two games, winning 11-8, 11-8. Perry fought back to win the third 11-7 and held two game balls in the fourth, which David fought off to earn a match ball for herself. Facing a match ball, Perry pulled off an irretrievable cross court nick and and pushed ahead to win the fourth 14-12.

Perry earned an early lead in the fifth, which she maintained until she clinched the title 11-7 after seventy-four minutes.

The $50,000 title is the largest of the twenty-seven-year-old Englishwoman’s career to date, and one that carried an extra emotional weight.

After clinching the title, Perry knelt down and looked up to the sky in remembrance of her grandmother.

“I was just thinking of my nan at championship ball down, it’s one I’ve got to dedicate to her because she passed away a couple of weeks ago and on that championship ball I told myself that I had to be brave and do it for nan and it worked,” Perry said. “If a dead nick isn’t a sign that she’s looking down on me then I don’t know what is. I had nothing in the tank but I just kept getting another a ball back against someone who was playing amazing.”

Perry, world No. 6, spoke of the respect she has for David, the sport’s most decorated woman.

“Nicol is one of the best human beings and one of the best ambassadors for squash there has ever been, so thank you Nicol for such an amazing match,” Perry said. “Nicol is an absolute legend, she’s the nicest person you will ever meet and she’s so fair on court. I don’t know how I won that.”

“Everyone is so strong now, women’s squash is so interesting at the moment because there are eight girls who are all in there to win it and any of them can win it,” Perry said. “I’m just trying to put myself there as one of those contenders. This is my biggest title and I reached my first World Series final last season, so I’m looking to set my marker down early. Winning this one has kick-started my season and hopefully it’s a sign of things to come for the rest of the year.”

The ensuing men’s final saw two Egyptian teammates pitted against each other in the form of one seed and reigning men’s world champion Karim Abdel Gawad and world No. 3 Mohamed Elshorbagy.

Both players were making their debuts in San Francisco this week and endured five-game semifinals Friday night.

ElShorbagy edged an early lead 11-9 in the first, and stormed through the rest of the match to claim the title 11-6, 11-3 in forty-five minutes.

“I’m really happy, it’s only my first tournament of the season and I think it’s the first time in my life that I have won the first tournament,” ElShorbagy said. “When I was world No. 1 for twenty-eight months, all of the players studied me every single day but, coming into this season, I’m studying everyone. I’m coming in really hungry and I really want to do well this season. I’ve put in a lot of work this summer and there is nothing in my mind apart from getting back to World No.1 this season. I’m going to do everything I can to get back to where I feel I should be.”

The twenty-six-year-old based in Bristol credited his title success to working with former world No. 1 David Palmer in the month leading up to the tournament.

“I told him just after the match that he had a tough career, a tough life but from now on he will be having an even tougher life because he’s not getting rid of me anytime soon,” ElShorbagy said. “I’m really glad to have him in the team and I’m looking forward to working with him over the next few years.”