September 25, 2019 By Chris McClintick no Comments 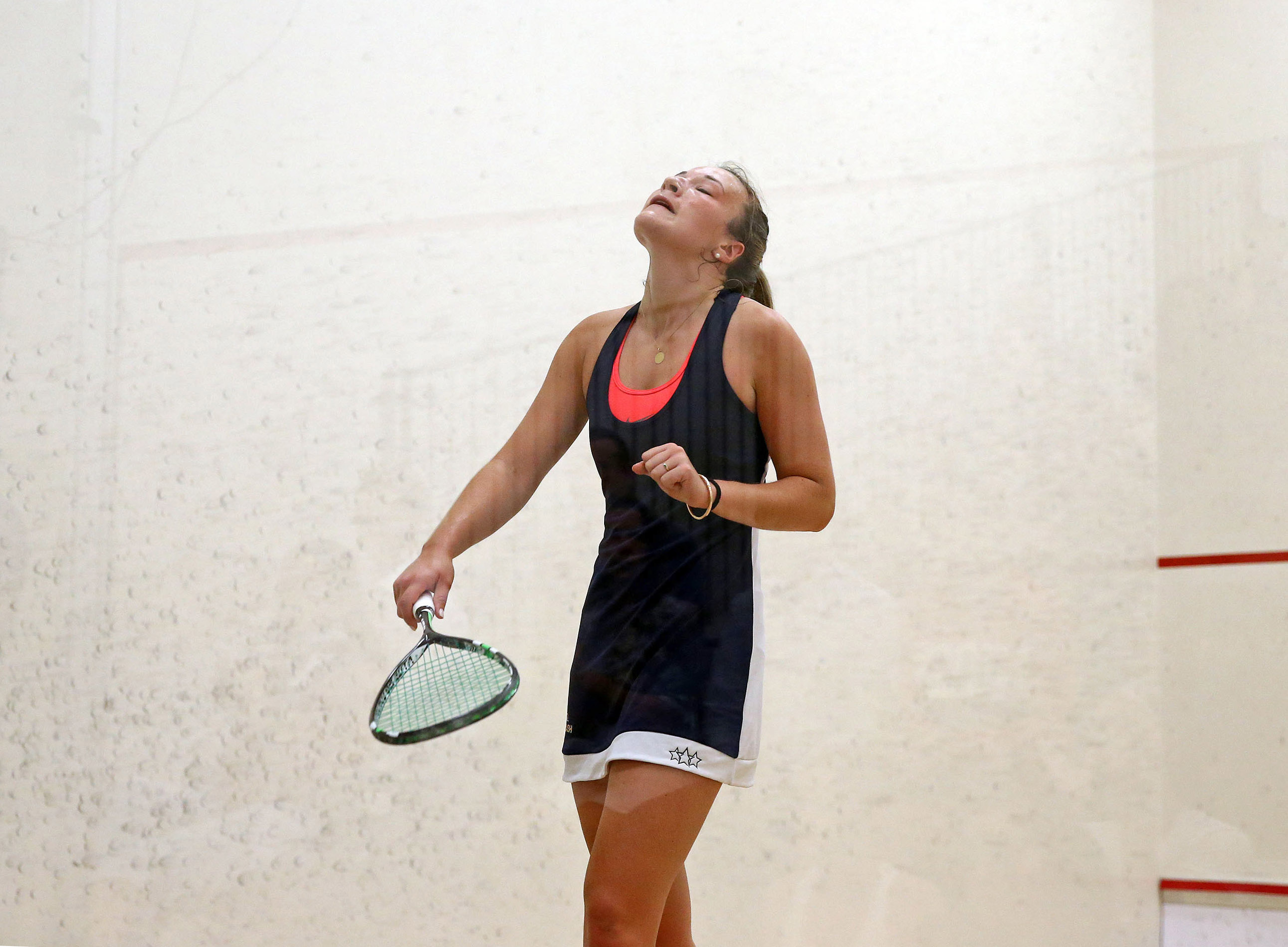 [Above: Olivia Fiechter celebrates her San Francisco debut with an upset]

The first half of the first round saw four matches at both venues and the debut of the best of three scoring format in the tournament’s tenth year.

Fiechter, world No. 39, produced the first upset of the day and would only need two games against world No. 27 Tinne Gilis. Fiechter, who was making her debut in San Francisco, controlled the match to win 11-6, 11-8 in twenty-three minutes at Bay Club. The Princeton graduate is making her debut in San Francisco at the beginning of her second full-time season on the PSA World Tour.

“I have a lot of friends in the area and it was awesome to have them come out in support. It always helps. Both games were tight so I was able to use the support to push through in the end,” Fiechter said. “I just came out of university and I love the idea of playing for a team. Having people out here that I know and love and being able to pull out a win for them makes it all the more special.”

Fiechter enjoyed a successful debut season on the pro tour over 2018-2019, rising more than 100 places in the world rankings and ending the season inside of the world’s top forty. The twenty-three-year-old also sustained an injury in her final tournament of last season, but said she is fit and ready for her second round match up against New Zealand’s world No. 6 Joelle King.

“I suffered a partial tear in my left quad but obviously it could not have come at a better time,” Fiechter said. “The beginning of my summer was just recovery and giving it time to heal. Then I had some physical therapy and it became a straightforward process. I am really excited because I have never played Joelle. I have grown up watching her play and she is an incredible player. It is a really exciting opportunity and I am looking forward to it.”

U.S. teammate Olivia Blatchford Clyne made it three American women in the second round later that evening at Squash Zone. The world No. 19 from Connecticut dispatched Scotland’s Lisa Aitken 11-7, 11-6 in twenty minutes in a clean performance with just one unforced error.

“It’s a good feeling because usually it’s not that was,” Blatchford Clyne said. “I was feeling good, I’m happy to be back in San Francisco. This is my first time at Squash Zone and it’s so cool, this place is awesome. We need more places like this all over the map. But I’m happy to be back and definitely happy with my performance.”

Penn graduate and French international Melissa Alves opened up the tournament with an upset in the first match of the tournament over England’s world No. 22 Millie Tomlinson. Alves had only entered the draw over the weekend due to the withdrawal of Nour El Sherbini.

Egypt’s Karim Ali Fathi recorded the lone upset in the men’s draw in the final match of the day against England’s world no. 24 Tom Richards. One year after upsetting Cesar Salazar at Squash Zone, Ali Fathi enjoyed more success on the same court, coming back from losing the first game to prevail 8-11, 12-10, 11-8 in fifty-five minutes.

Germany’s Raphael Kandra set up an intriguing second round match up against compatriot and three seed Simon Rösner. Kandra held off a tough challenge from Spain’s Iker Pajares Bernadbeu 11-9, 11-4 in twenty-four minutes.

“I was prepared for a really hard encounter today as we have had some real hard matches in the past. I had good tactics, they were working well and I got through in two games,” Kandra said. “Really looking forward to playing Simon. It has been a while since we last played, and it will be a good match. I am really looking forward to it!”

View all of Tuesday’s results here. (Note: all game scores listed 11-0 were not contested)