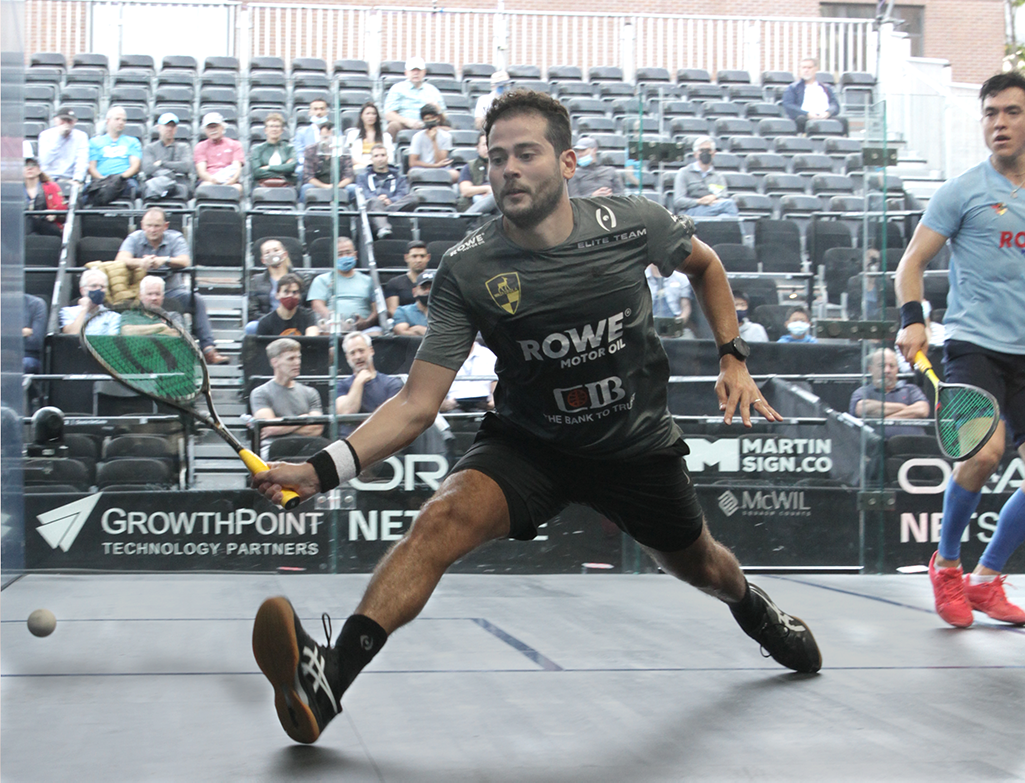 [Above: Karim Abdel Gawad (l) takes out Miguel Rodriguez in first round.]

In the first tournament produced by Squash Engine in the United States since January 2020, the Oracle NetSuite Open kicked off this afternoon at Embarcadero Plaza in San Francisco. Featuring nearly all the top men and women, in 16-player draws, the early rounds promise high paced play in a best of three game format—the finals will be played as best of five games.

San Francisco weather has been on its best behavior and is expected to keep it up for the duration of the event which culminates on Monday night, September 27.

Had you seen just the third game in the opening match of the 2021 Oracle NetSuite Open, featuring Egypt’s No. 6 seed, Karim Abdel Gawad, and Colombia’s Miguel Rodriguez, you might believe the match was over in five minutes and dominated by the Egyptian. You would be wrong.

Despite the rapid third, the opening two games took nearly 40 minutes as Rodriguez controlled the tempo and dictated play throughout. After taking a methodical and commanding 8-4 advantage in the first, Rodriguez hung on to secure the game 14-12 with patient length that seemed to frustrate Gawad.

It was more of the same in the second as Gawad struggled to impose his attacking style and looked to be struggling with fitness as Rodriguez continued to emphasize excellent length. But after Gawad escaped with the game, 11-7, the wheels came off for Rodriguez in the third when Gawad began attacking the front court relentlessly.

“Miguel is a very strong player, and in the two out of three games format, it is very difficult if you lose the first game. So I tried to just play my best squash,” explained Gawad in his post-match comments. “After losing the first game, I just decided that I didn’t want to lose again in the first round, so I kept trying to make him play my game.”

The first game of this afternoon’s first round match between American Sabrina Sobhy and New Zealand’s fifth seeded Joelle King was a back and forth battle with both players seemingly on track to win. But each time one created a four or five point gap, the other closed it down. Sobhy had one opportunity to win that opener at 10-9, but King refused to cough it up and walked off the court with a 12-10 nail biter.

In the second, errors crept into Sobhy’s game, handing King a commanding 8-4 lead. But rather than succumb to the pressure she was putting on herself, Sobhy reversed her fortunes and leveled the score at a game each, 11-9.

Despite her disappointing second game, King regrouped and jumped out to a commanding 5-love lead and, again, appeared to be heading to a convincing third game. Sobhy, however, had different plans and put together a string of winners, the last of which wrong-footed the Kiwi and nearly caused her to fall over. That was, perhaps, the turning point in the game because King reestablished her dominance and punched her ticket into the second round, without dropping another point, 11-9.

The afternoon’s third match of the day started to resemble a prize fight that included a cut above Frenchman Gregoire Marche’s eye, and then deteriorated into a number of contentious moments between Marche and the referee when let and stroke decisions weren’t going his way. Egypt’s fifth seeded Marwan Elshorbagy kept his head down and took care of business in two games after a 10-minute blood injury timeout taken by Marche in the first game.

Wrapping up the afternoon session of day 1, Egypt’s Salma Hany, seeded No. 6, made quick work of Canada’s Danielle Letourneau, 11-3, 11-6. One week ago, Hany reached the quarterfinals of the CIB Egyptian Open, and her sharpness was on full display today as she dictated play from the start, ultimately capping off most of her points with unreachable drop shots. With today’s win, Hany moves onto the quarterfinals for the first time in the Oracle NetSuite Open since 2017.