September 27, 2019 By Chris McClintick no Comments 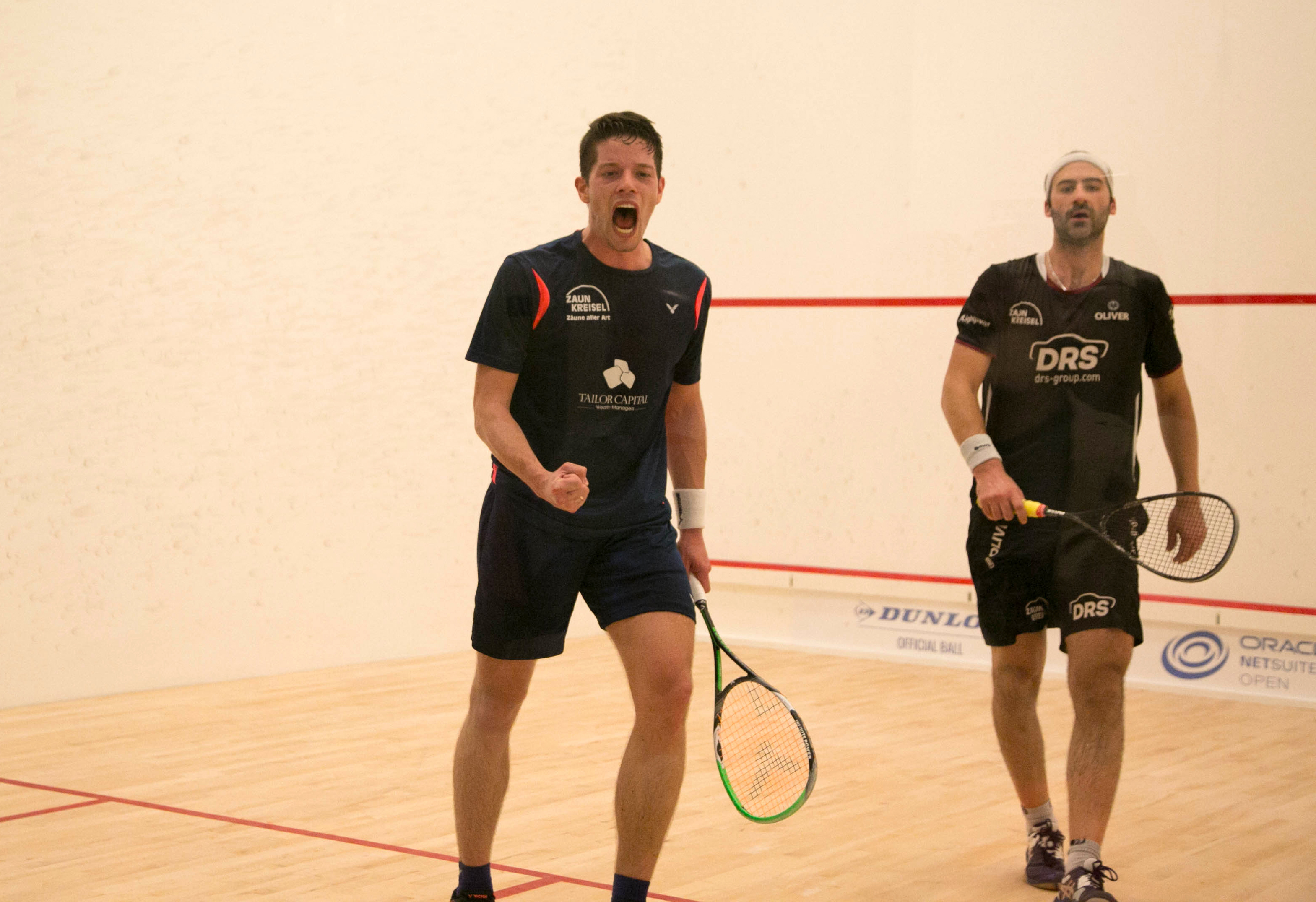 [Above: Kandra celebrates his first career win against his German teammate]

The final match of the 2019 Oracle NetSuite Open second round produced the most dramatic result of the tournament thus far, as German No. 2 Raphael Kandra upended his teammate and world No. 5 Simon Rösner for the first time in his career Thursday, September 27, at the University Club of San Francisco.

Kandra, world No. 27, marked his return to San Francisco for the first time since the 2015 NetSuite Open, when he lost in qualifying. After a two-game opening win over Spain’s Iker Pajares, Kandra earned a second-round match up against Rösner, the tournament’s three seed. Including German nationals and the PSA World Tour, the top two-ranked Germans had met seven times leading into their encounter on nob hill—all of which were won by Rösner.

The tides turned in Kandra’s favor Thursday night, as the twenty-eight-year old embraced the intensity of the best-of-three format, piling the pressure onto Rösner. Between unforced errors and precise shot-making, Kandra took the match 11-9, 11-7 after thirty-three minutes.

“Two days ago when I beat Iker, I had a similar strategy of precision and pressure, and it worked quite well even though it was a different court at the Bay Club,” Kandra said. “With the new format, you get punished for your bad shots or when you go for a silly shot. Almost 50% of those opportunities for him went into the tin luckily for me. I was trying to stay as mentally sharp as I could. With a maximum of three games, physically you can push yourself, but in my head I had to stay sharp and make the precise shots.”

Kandra will make his debut on the Oracle NetSuite SuiteSuccess glass court Friday night against Egypt’s Marwan ElShorbagy, who returned to the tournament for the first time since 2016, and dispatched compatriot Karim Ali Fathi 11-4, 11-9 in twenty minutes. ElShorbagy will have the opportunity to set up a semifinal against his older brother, Mohamed, who held off France’s Mathieu Castagnet in an entertaining match at Bay Club San Francisco.

The women’s second round progressed according to seeding with all eight of the top seeds advancing, and only two requiring three games to advance.

The first three-gamer was one of the first matches of the day involving Egypt’s world No. 1 Raneem El Welily and Team USA’s world No. 19 Olivia Blatchford Clyne. The American held the advantage throughout the first game, eventually closing it out 11-9. The Egyptian regained her composure and improved her form to take both the second and third games 11-5.

Friday night’s session on the glass court will stage a rematch of the 2018 final between El Welily and two-time defending champion Sarah-Jane Perry, after the English world No. 5 Sarah-Jane Perry defeated compatriot Emily Whitlock 11-6, 11-8.

“She played really well against me a couple of weeks ago in Nantes. I felt a little flat in that tournament, but I have been feeling better in between, and I just tried to come out and play with a little bit of confidence,” Perry said. “As both games went on, I started to find my way and my rhythm and momentum. Hopefully tomorrow, I can actually start well and not wait until halfway through the game.”

Perry has now won nine consecutive victories in San Francisco, spanning back to the beginning of her 2017 title campaign.

“It feels a lot like last year,” Perry said. “I think I was the No.5 seed last year as well so it is very much the same. Every opponent was tough last year and that is the same again this year. You are never thinking about any rounds further ahead, just the one that is right in front of you.”

The bottom half the women’s draw will feature an intriguing quarterfinal on Saturday between Team USA’s Amanda Sobhy and Egypt’s Nour El Tayeb. The two top-ten-ranked players met three times on the PSA World Tour last season with the American winning two out of three of the match ups.