August 23, 2018 By Chris McClintick no Comments 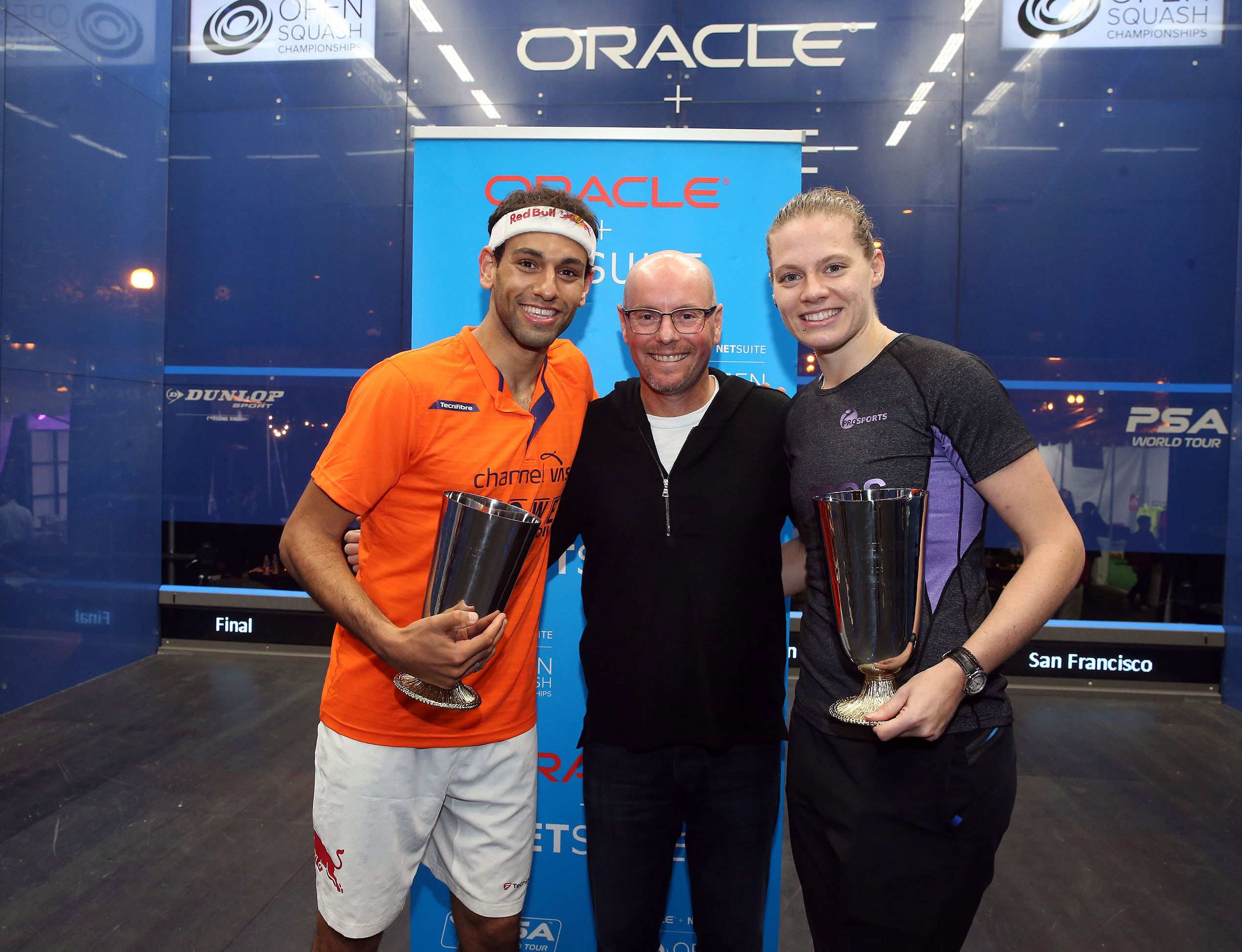 The 2018 Oracle NetSuite Open Squash Championships has attracted the highest caliber professional men’s and women’s draws ever hosted in the San Francisco Bay Area—featuring current and past world champions—September 27-October 2. The tournament welcomes a second year of continued support from lead sponsor Oracle NetSuite, after seven years under the NetSuite Open title.

For the seventh year, the main rounds of the $220,000 PSA World Tour men’s Gold and women’s Silver pro tournament will be staged on the all-glass Oracle NetSuite SuiteSuccess Court in Embarcadero Plaza on the Embarcadero.

“Squash is a thriving international sport showcasing some of the best athletes in the world. It is only fitting that Oracle NetSuite tap into this fabulous sport that is on the rise and which also benefits so many local Bay Area community initiatives,” Evan Goldberg, Executive Vice President of Development, Oracle NetSuite.

Both 2017 champions, current PSA World Tour No. 1 Mohamed ElShorbagy of Egypt and PSA World Tour No. 8 Sarah-Jane Perry of England, return to defend their titles in the men’s and women’s draws respectively. The full field of professionals and the draws are available at www.oraclenetsuiteopen.com.

“It is a terrific testament to the city, the tournament and the local community that the Oracle NetSuite Open gets a better draw every year,” says tournament promoter John Nimick of Squash Engine. “Seeing so many recent or current world No. 1 players in the tournament ensures the competition in San Francisco will be a highlight of the PSA World Tour season.”

In the men’s draw, Karim Abdel Gawad, 2016 men’s individual world champion and current No. 8, returns to challenge for the title he was denied by ElShorbagy in the 2017 final, while second-seeded No. 2 Ali Farag of Egypt makes his second appearance. No. 4 Tarek Momen of Egypt and No. 5 Simon Rӧsner of Germany are the three and four seeds respectively. Three former world No. 1’s and Oracle NetSuite Open veterans, Gregory Gaultier of France, Ramy Ashour of Egypt and James Willstrop of England, enhance the men’s field, together with 2017 British Open Champion and South America’s highest-ever ranked player, No. 6 Miguel Angel Rodriguez of Colombia.

Raneem El Welily, 2017 world champion and current PSA No. 2, will lead her first Oracle NetSuite Open draw as the women’s top seed, while New Zealand star Joelle King, No. 4, is seeded second. French No. 1 and PSA No. 5 Camille Serme makes her first Oracle NetSuite Open appearance as the third seed, while 2016 Champion and former world No. 1 Laura Massaro of England looks to return to the podium from the fourth-seeded position.

Nicol David of Malaysia, the sport’s most decorated female with eight world championship titles and nine years as No. 1, returns for her third Oracle NetSuite Open. Amanda Sobhy, America’s highest-ever ranked professional at No. 6, returns after a year-long rehabilitation from a career-threatening Achilles tendon rupture and starts her campaign from the No. 18 position in the round of 32 together with fellow American and No. 14 Olivia Blatchford.

While the men’s and women’s draws feature international professionals from more than 15 countries, the Oracle NetSuite Open benefits the local community through its official charity, SquashDrive, a Squash and Education Alliance program. SquashDrive is an intensive after school, weekend and summer program that uses the unique combination of squash instruction, academic support and character building to help Bay Area public school students reach their full potential. Last year, the Oracle NetSuite Open helped SquashDrive reach its $70,000 fundraising goal during the tournament to support its growing College Prep program. This year, SquashDrive is looking to raise money via a squash and ping-pong corporate challenge to help provide STEM enrichment opportunities for its 84 student-athletes. Visit squashdrive.org for more information.

Professionals won’t be the only players competing on the bay area squash courts during the during the Oracle NetSuite Open as local clubs including the Bay Club, University Club and Olympic Club prepare to host the Oracle NetSuite US Squash Junior Gold tournament September 21-23 and the Latitude 38 Group Open adult singles tournament September 28-30.

The first round of the pro divisions of the Oracle NetSuite Open will take place September 27th at Bay Club Redwood Shores and Squash Zone in Redwood City, while the second round will take place September 28th at the San Francisco clubs. Three women’s quarterfinals will be staged at the Bay Club during the day on Saturday September 29th and then the competition moves to the SuiteSuccess glass court at Embarcadero Plaza for the later rounds on the evenings of September 29th to October 2nd.

A special event called FanFest has been added to the tournament schedule from 4:30-6:30pm on Sunday September 30th at Embarcadero Plaza. The ticketed event invites squash fans to play games, including squash, table tennis, foosball, cornhole, and bocce, with the world’s best squash players and get autographs and pictures.

Tickets are on sale now for select club sessions and all glass court play, September 27-October 2, at www.oraclenetsuiteopen.com/tickets, with a price range available for every budget.