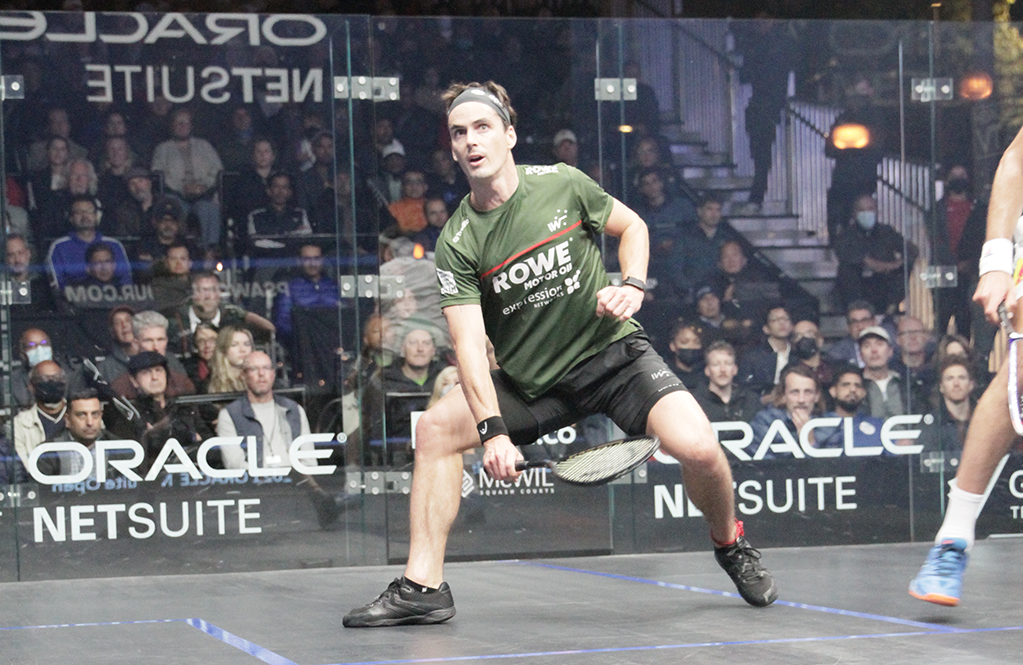 [New Zealand’s Paul Coll, one day after taking out Marwan Elshorbagy in the quarterfinals, advanced to Monday’s final with a win over Elshorbagy’s older brother Mohamed]

On a chilly semifinals night in the 2021 Oracle NetSuite Open presented by Growthpoint, with a cool breeze coming drifting in from the San Francisco Bay, a packed house was treated to an opening match featuring patience and relentless play by Paul Coll of New Zealand and Egypt’s Mohamed Elshorbagy. The left wall, backhand for both players, was a point of emphasis, with each player content with keeping the ball on that side at all costs. Lengthy pinpoint rallies, lasting upwards of 40 strokes each, resulted in the first upset of the night as Coll advanced to the finals tomorrow night.

Despite dropping the first game, but not without a fight after falling behind early, Coll took the game to Elshorbagy by focusing on the deepest parts of the court. The goal seemed to be either win points by keeping the ball so deep that it was unreturnable, or force a loose shot from the back and then attack the front corners with severity. That strategy worked to perfection in the second game, drawing Coll level.

In the third, it was more of the same, but after 6-6, Coll established a gap that forced Elshorbagy to work harder just to stay in the match. Elshorbagy did manage to claw his way back to 8-9, but Coll caught Elshorbagy on a weak crosscourt that the Kiwi was able to place into the front right corner. On match ball, Coll coaxed a loose ball out of Elshorbagy through the middle of the court. After a quick video review, and a stroke decision, Coll had conquered the World No. 2 and top seed in San Francisco.

In the second upset of the night, Egypt’s Salma Hany shocked Joelle King of New Zealand in a match that took just 22 minutes.

In contrast to the evening’s first match, Hany took advantage of the cold conditions with unreachable drop shots and a devastating boast that left King with nothing to hit. That’s not to say that Hany didn’t also emphasize placing the ball into the depths of the court, she just didn’t need to. Never, in either of the two games, did King have a lead.

“It feels really amazing to win tonight after beating Nouran (Gohar) yesterday,” said Hany afterwards. “It’s a real pleasure to play in front of this amazing crowd, and to share the court with Joelle.”

When asked how she felt she was able to focus so well in tonight’s match, Hany said, “I just tried to keep my head. I was just trying to make the most out of it and not try to think about the result. Yah, it went good.”

Late in the third game of the men’s second semifinal, after Egyptian Ali Farag had built a seemingly insurmountable lead over fellow Egyptian Mostafa Asal, Farag sent Asal scrambling desperately around the court. Unfortunately for Asal, a dive to the back right resulted in a shoulder injury that forced him to retire from the match.

“It’s terrible. I hate to see such a thing, especially when I’m on the court with him,” Farag said. “He’s such a brilliant player at the age of just 20. I just hope it’s nothing serious.”

From the start of the match, Farag had his hands full with the rising star who took out the third seed, Tarek Momen, in the quarterfinals. Trailing midway through the first, Farag put together a string of winning drop shots to take a lead and then hung on to win it, 11-8.

In the second, Asal built a 3-point lead twice, but Farag closed the gap each time with punishing length and width. But Asal hammered a couple of volley crosscourt nicks to secure the second, also 11-8.

The third was a different game entirely. Farag, while saying he just plays the game by instinct, made a clear decision to step further forward in the court. The impact of that choice was dramatic as he built a 7-0 lead in a matter of minutes. Instead of allowing the time for Asal to recover to the back court for deep balls, Farag eliminated the time needed by volleying the ball practically before Asal had finished his swing.

While Asal managed to win a few points to make it interesting, Farag kept up the pressure, literally cutting balls off with both feet forward of the service box. Farag next faces Paul Coll in tomorrow’s final.

American Amanda Sobhy needed just 18 minutes to punch her ticket to her third final in the Oracle NetSuite Open. Runner-up in 2016, Sobhy beat England’s Sarah-Jane Perry to win the 2015 edition—and she beat Perry again in the semifinals tonight.

Sobhy came out firing early in both games, building commanding leads that forced Perry to put in an unsustainable effort to keep things close. Attacking the front corners with well-placed and timely volleys, Sobhy kept Perry too deep in the court to retrieve the ball.

Asked if that was her strategy, Sobhy said, “I just told myself to come out as fast as I can and don’t let up.”