October 03, 2018 By Chris McClintick no Comments 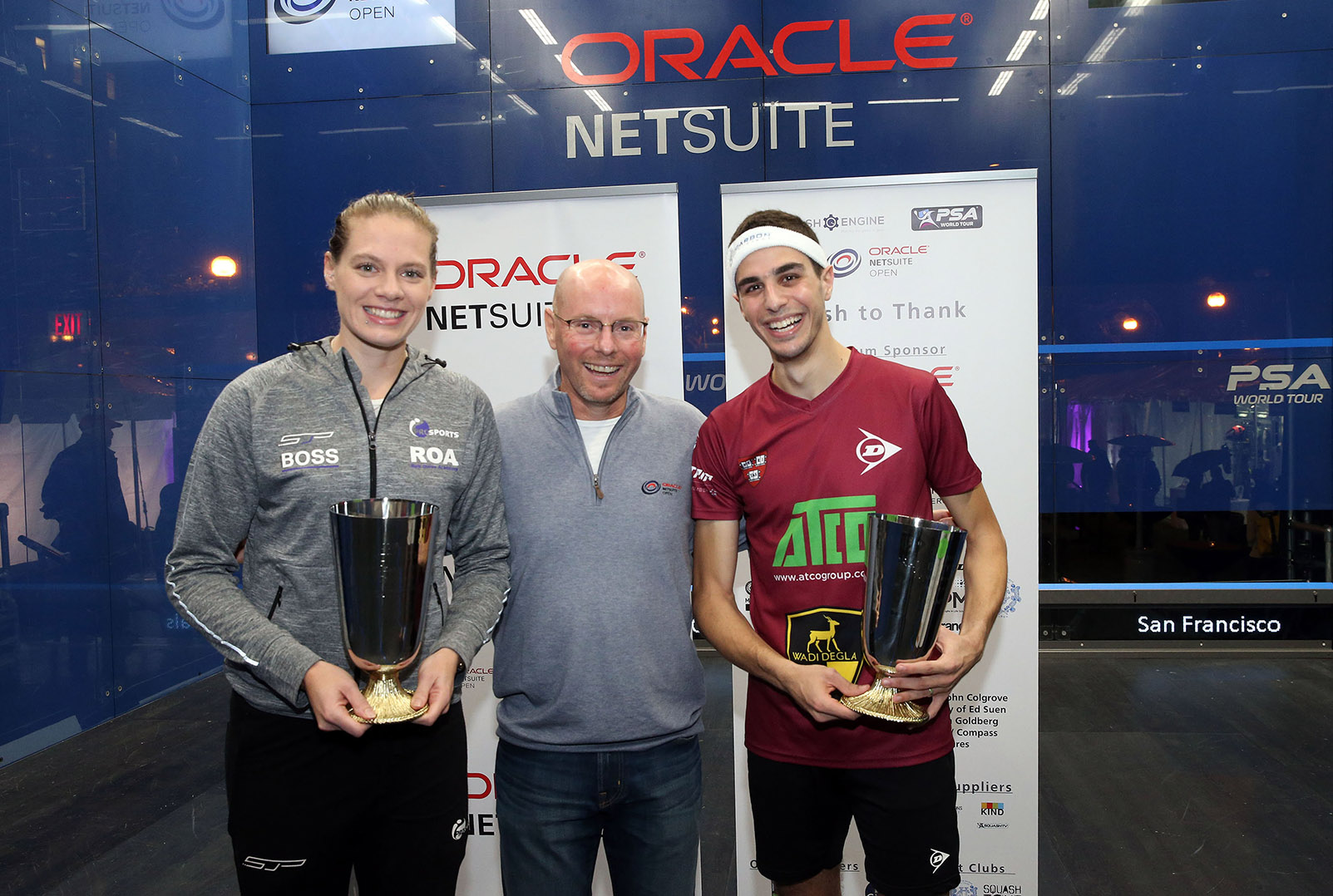 San Francisco has proven to be a special location for Perry, who celebrates the largest title of her career in what was her third final appearance. The Oracle NetSuite Open prize purse rose to $88,000 for the first time this year after staging $50,000 draw in 2017. Staking his claim in a five-game semifinal against three-time champion Gregory Gaultier, Farag finishes his third appearance in San Francisco with just his third career victory against ElShorbagy while ranked world No. 1. The Harvard graduate takes home the top honors in the $118,000 PSA Gold men’s draw.

The women’s final opened proceedings in the fourth and final evening session of matches on the glass court. Despite the seedings and world rankings, Perry opened the match with the upper hand, using length and accuracy to earn a two game lead. Perry stood within two points of clinching the championship, up 9-7 in the third, when El Welily turned the match on its head, rattling off four straight points to force a fourth game. El Welily continued to press in the fourth game, maintaining a lead throughout the game until clinching at 11-7.

Perry re-calibrated in the fifth game, however, speeding to a 5-1 lead early on before earning six championship balls up 10-4. To the entertainment of the crowd, El Welily fired off three clear winners to go within three points, until a stray shot set up a stroke against the reigning world champion to clinch match point for Perry.

“I’m speechless,” Perry said. “She was making me work so hard and any time there was even a slight chance she was punishing me. I had to play as clever as I have ever done before and I was absolutely knackered in that fifth game, but I just forced myself to keep pushing. I knew I was playing well and that I didn’t have to chance much tactically, I just had to execute. But even at 10-4 up she was coming back and she hit some fantastic shots to get it back to 10-7 so there was a lot of relief at the end alongside the elation.”

The result marked Perry’s second victory in nine career PSA Tour match ups against El Welily. Last year, Perry dispatched the top two seeds on the way to what was then her largest career title of $50,000.

“I dedicated the win here last year to my Nan (who passed away shortly before the event),” Perry said. “My mum said she’s be looking down watching over me tonight as well so this one is defiantly for her again.”

A colossal men’s final followed on court pitting the world’s top two-ranked players and Egyptian teammates against one another. It marked their fifth PSA World Tour final against one another over the past calendar year since the 2017 U.S. Open, which Farag claimed. However, ElShorbagy had won all three ensuing finals at St. George’s Hill Classic, Hong Kong Open and World Series Finals.

The first game progressed with the players trading points until 8-all, when Farag shot three winners out of four rallies to earn a 1-0 advantage. ElShorbagy appeared to be on the brink of leveling the score in the second game with a 9-7 lead, but Farag came back to force extra time. At 10-all, the Egyptians epitomized the best of the sport with a grueling two-minute rally that culminated in the rivals embracing out of mutual respect, despite the importance of the point. Farag ultimately fought off the game ball to take the second game 13-11 immediately after.

The world No. 1 ensured he wouldn’t roll over easily in three games storming to a quick third-game victory, 11-4. After tactically conceding the fourth game, Farag returned energized in the fourth, earning a 9-4 lead. ElShorbagy then scored five straight points to level the score at 9-9. A no let call handed Farag his first championship ball, which he converted with a boast.

“I’m feeling great right now, I’m very, very happy to have won this title,” Farag said. “When I first saw the entry list I thought I would withdraw from playing because the draw was so strong. But my mentor Karim Darwish told me that I should play the event and show people that they should be scared when seeing my name in the draw—that is the kind of mentality that I need to have if I hope to be world No.1 some day.”

Farag had contested the last match on court against Gaultier Monday night, but showed no signs of fatigue in the final.

“I wasn’t at my best last night (against Gaultier) but I was optimistic that I would play at a higher level tonight because sometimes you need matches like that to help get you into the rhythm,” Farag said. “Tonight against Mohamed I had to be on my mettle throughout. He’s a great champion and such a determined fighter—which he showed even when I was ahead in the fourth game, so I’m very glad I managed to get this last few points.”

The result opens up the door to what could be an incredibly competitive season between the world’s top two-ranked players. Just seconds after championship point and as the tournament’s final trophy presentation took place on the glass court, the sky opened up to precipitate the first rain San Francisco has seen in sixth months. Tournament organizers had been continuously monitoring the weather throughout the week. It was the proverbial bookend to what has been the highest-caliber week of squash the San Francisco Bay Area has ever witnessed.