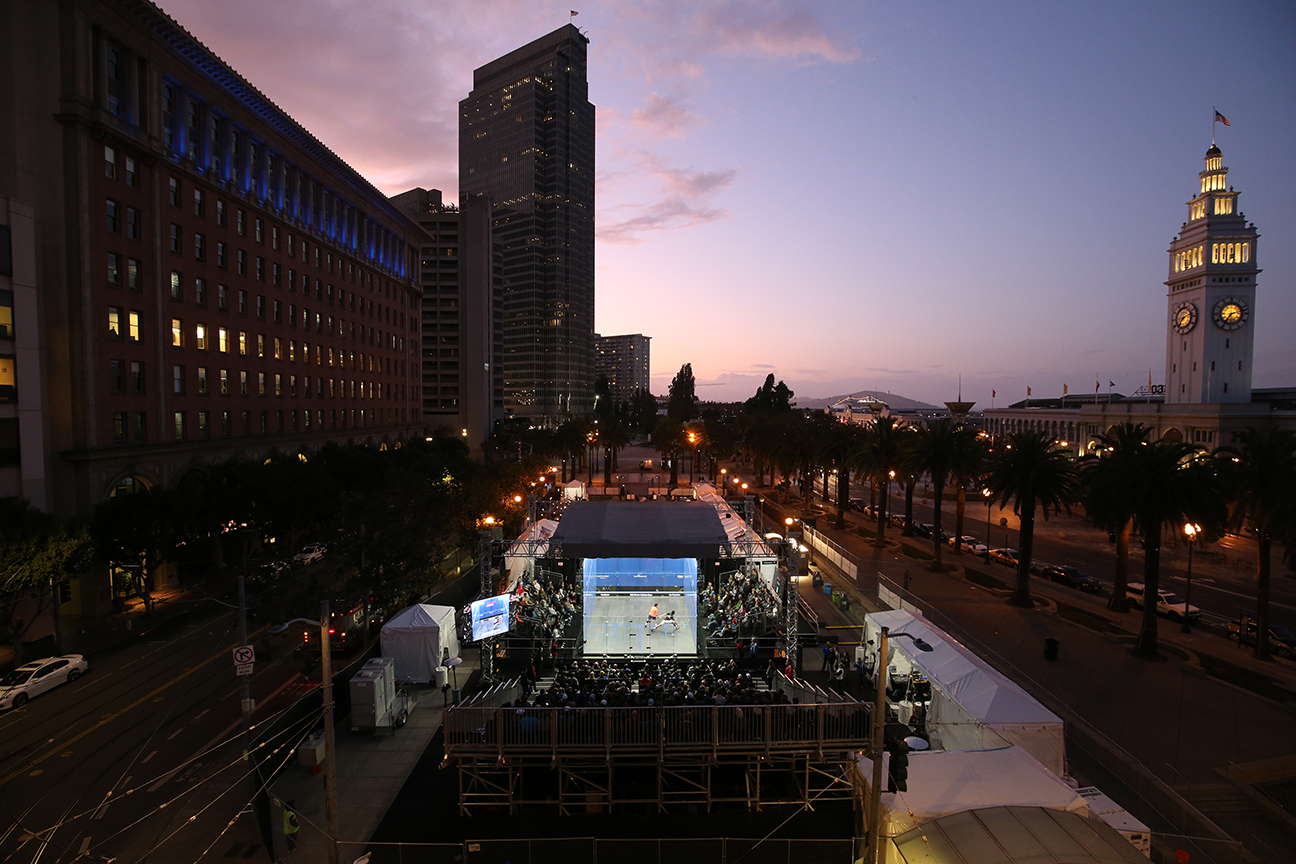 The draws for the men’s and women’s Oracle NetSuite Open PSA World Tour Gold tournament have been released with the event set to bring world-class squash back to San Francisco’s Embarcadero Plaza between September 23-27.

Four previous winners of the Oracle NetSuite Open will be present this year, with Amanda Sobhy, Sarah-Jane Perry, Ali Farag and defending men’s champion Mohamed ElShorbagy all in action as the tournament returns to the PSA World Tour calendar following a hiatus in 2020 due to the global COVID-19 pandemic.

This year’s Oracle NetSuite Open will see all 30 matches played on the Squash Engine Court on Embarcadero Plaza in the shadow of the iconic San Francisco Ferry Building. A best-of-three games format will be used once again at the event up to and including the semi-finals, with both title deciders reverting to best of five.

ElShorbagy, the current World No.1, will be the top seed for the men’s event in San Francisco, and his campaign will start against compatriot Mohamed Abouelghar in a tough first round fixture.

He then faces the possibility of meeting either Colombia’s Miguel Rodriguez or 2016 World Champion Karim Abdel Gawad in the quarter-finals. Either Paul Coll – who won the historic Allam British Open in August – or younger brother Marwan ElShorbagy await in the semis, before a possible meeting with familiar foe Farag in the final.

Farag will be the No.2 seed for the tournament but will return to World No.1 ahead of the tournament, with his run to the final of the British Open ensuring he will overtake ElShorbagy on September 1. A first round clash against CIB PSA World Tour Finals winner Mostafa Asal awaits Farag, while either Fares Dessouky or India’s Saurav Ghosal will lie in wait for his last eight encounter.

From there, Farag could face either World No.3 Tarek Momen or Peru’s Diego Elias in the last four before a potential meeting with ElShorbagy in the final, one that could have a large say in the battle for World No.1

World No.2 Nouran Gohar heads the women’s draw as she makes her Oracle NetSuite Open debut and begins her campaign against Canadian No.1 Hollie Naughton. She could then face either another Canadian in Danielle Letourneau, or Egypt’s Salma Hany in the second round.

The former British Open champion is then in line to do battle with either compatriot Hania El Hammamy or New Zealand’s Joelle King in the semis, before a possible meeting with either 2015 champ Sobhy or two-time winner Perry in the final.

Perry is a real crowd favourite after wins in 2017 and 2018 and she will start her campaign against Rowan Elaraby, before facing either Belgium’s Tinne Gilis or Indian No.1 Joshna Chinappa in the quarter-finals.

US No.1 Sobhy, meanwhile, faces Egypt’s Nadine Shahin in the first round before a possible contest with compatriot Olivia Fiechter or Welsh No.1 Tesni Evans. Perry would await Sobhy in the last four, if the two make it to that stage.

Following recent mandates from the San Francisco Department of Public Health and to ensure the safest possible experience for fans, supporters, players and the city of San Francisco, the 2021 Oracle NetSuite Open will require proof of full vaccination or a negative COVID-19 test taken within 48 hours of admission for all attendees 12 or older.

Action from the tournament will be shown live on SQUASHTV.